We set off this morning for our family holiday in Devon. We were going to have a change this year, but when we got our Christmas card from Hallsannery, we found this would be the last year of the holiday cottages.
Last night we fitted the roof bars, our new roof box and my cycle carrier. We had decided to only take my bike this year. Jo and I were up fairly early this morning and so we were able to get away by about 8.15. Packing the roof box was made very simple as we had bought the luggage set; this meant the kids could have a bag each and pack their own stuff (checked by us just to be safe).
We chose to stay away from the M25 as we thought it would be busy with the Olympics. Instead, we headed out through Aylesbury and Oxford for Avebury.
Avebury is the oldest stone circle in the world and the largest in Europe. I had never been before and wasn’t sure what to expect, even after looking at it on Google streetview.
It took us about 2 hours to get there, with a few delays at the end for local road resurfacing. Entrance to the stones is free after you have paid for the carpark.
We headed to the cafe first to get some refreshments and then headed off to see the stones. The first thing that strikes you is how uncommercial it feels compared to Stonehenge. You can walk up to and touch the stones and no-one’s in a hurry. There are some stone markers where the original stones are missing to give you the feel of the layout. 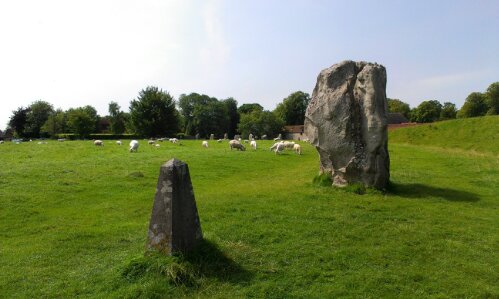 I don’t think the size of Avebury really sinks in until you leave the first field. I took lots of photos, the best of which I’ll put up in a gallery and link to later.
We ate at the cafe before going back to the carpark. As we were heading back to the car we could see Silbury Hill over the other side of the road, so we walked over for a better view. In all we were at the site for about 4 hours. My plan was to head south picking up our normal route west of Stonehenge (and missing the traffic). However, the satnav had other ideas and so we had a lovely drive through villages and joined the traffic queue east of Stonehenge. It probably added about 3/4 hour to the journey.
We stopped off at the Little Chef at West Knoyle on the A303 for a break. We were shown to a table that wasn’t clean and had food and dirty cutlery on the floor. When Jo pointed this out, we were told we could move to a different table and our’s was cleaned. However, the other tables weren’t clean either, so we moved back. We ordered 3 apple pies and a breakfast wrap. We were given knives and forks to eat these with. According to Jo the toilets were dire. Looks like Little Chef are reverting to their old ways.
We got held up in traffic on the A303 at Ilminster. We needed to turn right onto the A358 and the traffic was more or less stationary for half an hour. When we finally got onto the roundabout, there was a farm vehicle and trailer, loaded with hay that had overturned on the far side of the roundabout.
We stopped at Sainsburys on the way and eventually got to Hallsannery about quarter past eight. After unloading and eating, we watched some of the Olympics opening ceremony.

This entry was posted in General. Bookmark the permalink.