When I replaced my monopod in December with a Manfrotto 681, it didn’t occur to me that I would have to find an alternate method of carrying it while cycling. My previous monopod, Velbon UP-4DXII, had a handle on the tilt head and I used to slide this through one of the connection loops for the harness on my LowePro Toploader case. I could then tuck the other end into my belt and it stayed out of the way for cycling.

My Manfrotto monopod with the 234RC head doesn’t have a handle, not that you need a handle to pan with a monopod. It is also longer as it is in 3 sections not 4. This meant that I had a substantially larger item to carry, with no way of attaching it to me. I started in my usual way, by turning to Google. It didn’t seem too common an occurrence; I found a few suggestions of tying the monopod to the frame, but nothing from anyone who had done it. Then I came across this monopod quiver on a motorbike, that got me thinking. 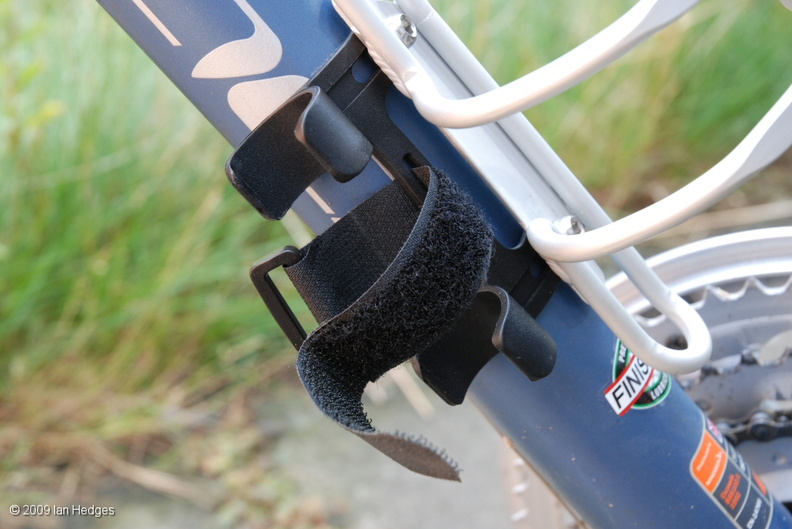 I had also been looking at the pump holder on Jo’s bike. The pump clipped in and was held in place with a velcro strap. If I could find the right diameter….no, that wasn’t possible, bike pumps are small and lightweight, not built like a section of drainpipe. So thinking about the monopod quver than I had found, I started experimenting to find a support for the bottom of the monopod. I cut a section of plastic waste pipe, yes, white is a lovely inconspicuous colour and attached it to the frame with cable ties. I had to play around with the positioning, to get it as low on the frame as possible without the pipe fouling the pedal. There wasn’t a lot of room to play with as the monopod also added to the space taken in this area due to the leg clamps. As a temporary solution at the top end I used a piece of rubber and a strap to prove the concept. It worked! Due to the minimal surface contact between the pipe and the bike frame, the pipe was liable to twist around the frame if knocked, so you had to be a bit careful. I found this while out testing it and added some rubber between the pipe and the frame to reduce the slip. 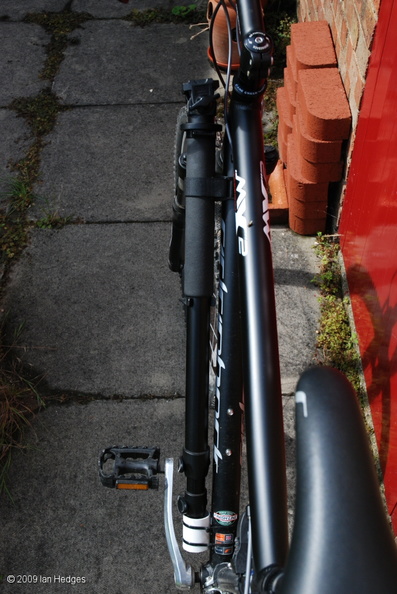 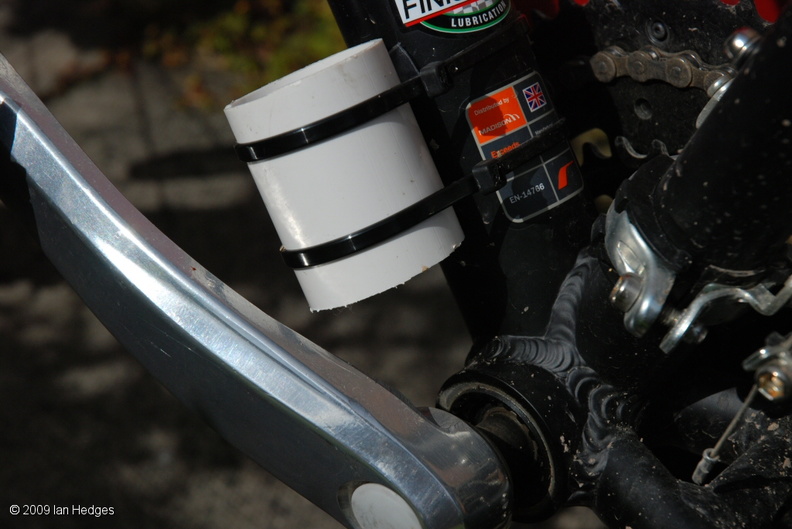 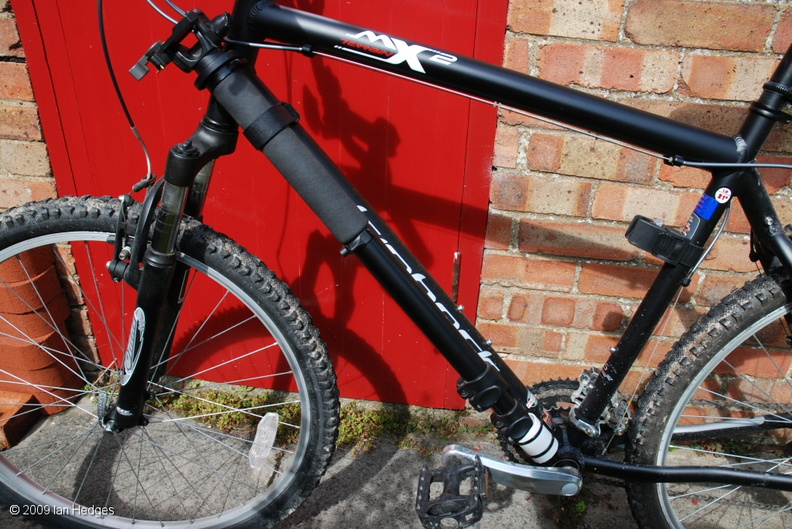 My temporary solution for securing the top of the monopod was a fairly long strap that went around the frame and monopd several times to provide security, the downside of this was it took an age to get attach and detach. I needed a method that was going to be quick and secure, so I started looking around for something that met my needs. 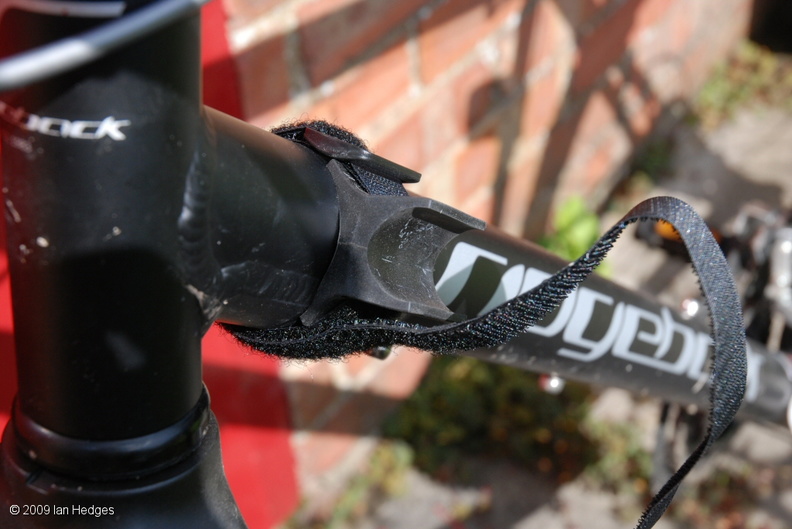 I started looking at long velcro straps, thinking they would work, but then I found the solution at Fenix-Store.com. They have a product called Bikeblocks, which are a rubber block with a long velcro strap passing through it. You can open the velcro right up to wrap it around the bike frame and then the remainder of the strap holds an item to the block. They even delivered free to the UK (from Atlanta); I had to wait about a week, which I would have considered good even if I’d been paying the postage. They are really designed to attach small lights to bike frames, handlebars, helmets etc and aren’t designed for going around two large items (frame and monopod), so the overlap of the opposing velcro is smaller than I would have liked, but is still enough to hold the monopod securely. If I was really worried, I could always stitch a piece of the loop velcro in place to extend the overlap.

I used this configuration for a few trips to confirm that it was really viable and then set about producing a more permanent solution (before I got too used to the white pipe). I bought some black waste pipe so that it blended in with my bike and cut myself a couple of pieces about 30mm long. This was shorter than the prototype, but as I was only using this to locate the end of the monopod it didn’t need to be too long. I taped the two pieces to a bit of cardboard with a gap of about 10 mm between them. I then taped cardboard sides to the edges of the two pipes. Then the fun begins! Start with a new pack of Araldite Precision, this is the slow setting Araldite. Mix a reasonable quantity of Araldite, and when it is mixed, scoop it into your ‘mould’. Repeat the mix and fill until the mould is full to the level of the pipe sections. It will take a lot longer than you think and use most of the pack of Araldite. Put the mould aside on a level surface to cure. 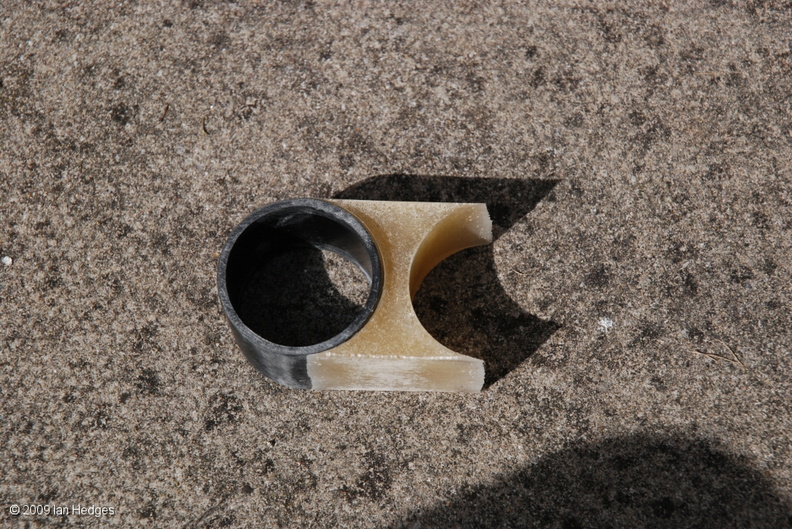 I left it a couple of days to be certain that it was thoroughly cured, before peeling the cardboard away. The Araldite had sunk a bit in the middle which I hadn’t expected, so maybe make it a bit taller than you want first. I wasn’t sure how strong the pipe to Araldite bond was going to be, and at first it looked as if both pipes were firmly attached. I had some sandpaper on a piece of wood and used this to smooth the bottom and side surfaces (and remove the last traces of the cardboard). Then I started hacksawing off one of the pipes; one was going to be used as the support, the other was a template for the bike frame profile. As I was finishing sawing through the pipe, it separated from the Araldite, timing is everything. This is where I picked up today, after a break of a couple of months, I was really getting used to the white pipe! The pipe that was used as a template for the bike frame wasn’t quite the same diameter and so I had to do a bit of sanding to get the fit right. I ended up holding a sheet of sandpaper tight around the frame (rough side out :)) and used this to sand the Araldite to the correct profile. 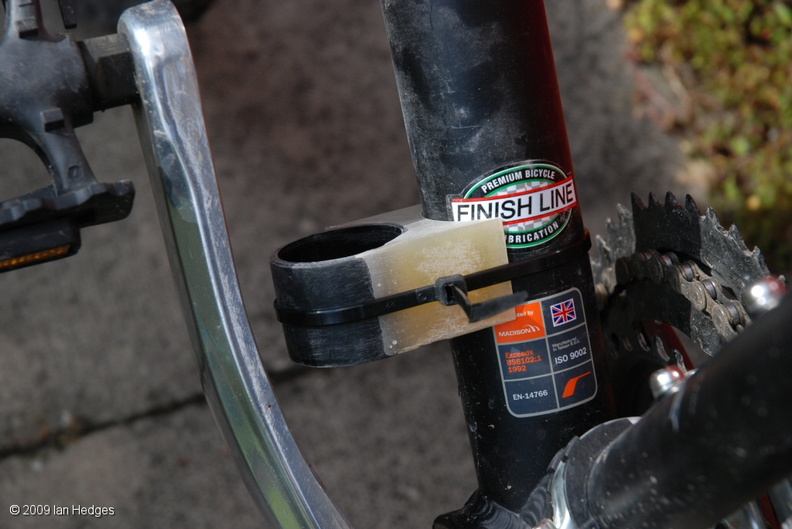 It was then time to attach the pipe and spacer to the frame with a cable tie, getting the position right again proved to be second time lucky. As the spacer is in contact with the frame for a greater area it no longer moves around the frame, which was a problem with the prototype. Due to the change of pipe position with the spacer from the prototype, the monopod is now carried the opposite way round; the leg clamps are towards the frame rather than facing out. I have added a second cable tie for security since the photo was taken. I may in the future remove it from the bike and spray it matt black, but at the moment it is doing the job nicely. Looking at the pictures, I think I should have wiped the sanding dust off the bike before I took the last couple of photos. So there you have it, my solution for carrying a monopod on my bike. 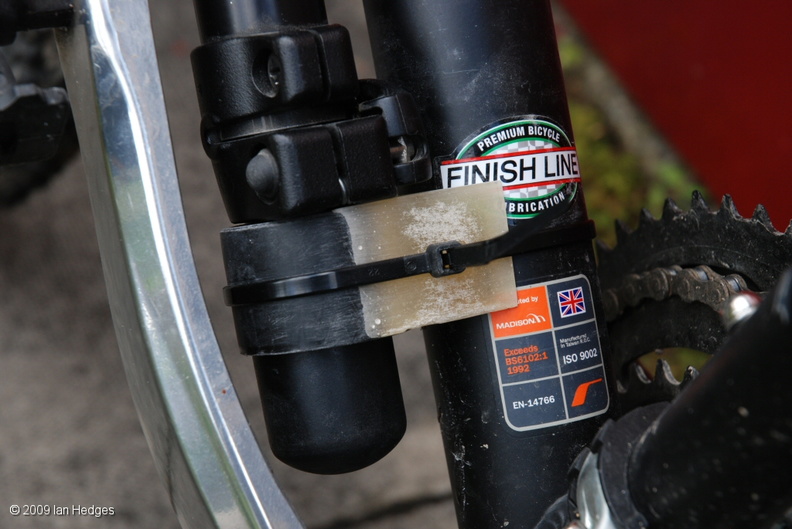 This entry was posted in Photography and tagged lowepro, manfrotto, monopod, ridgeback mx2, toploader 75AW. Bookmark the permalink.
Logging In...